Canterbury Seismic Instruments ('CSI') has been awarded its largest international contract yet, to supply and install wireless accelerographs and anemometers at fixed points along the bridge. These instruments, designed in Christchurch, will detect wind induced motion, with the system able to instantly communicate data to engineers and other personnel responsible for bridge safety.

The suspension bridge will have one of the longest spans in the world at 1,310 metres and will be 30 metres longer than the Golden Gate Bridge in San Francisco. The project was approved by the Storting, Norway's Parliament, in February 2006 as a replacement for a ferry connection between Bruvik and Brimnes in the upper Hardanger area. The project includes two 186 metre high towers and tunnels at each end. Construction began in 2006 and the bridge will open in 2013.

"This is a significant contract for CSI and we are very pleased to have the high quality and reliability of CSI technology selected for such an important project," said CSI chief executive Helen McLeod. "We are delighted to confirm our participation in the bridge project as CSI staff attend a major seismic engineering conference in Lisbon, Portugal, this week."

Canterbury Seismic Instruments is a New Zealand based manufacturer and exporter of structural monitoring equipment, providing engineers and building and infrastructure managers with a new generation of comprehensive, real time monitoring solutions. Structures can be monitored for seismic activity, wind effect, liquefaction (pore-pressure), strain, water depth and other environmental factors. Using open industry standards for communication, with remote access to data through a standard web browser, CSI Instrumentation is being used to monitor the health of the structure and to verify the design.

"One of the benefits of Christchurch's recent earthquakes was that the company's instrumentation has been proven on numerous critical structures and transport facilities," said C.S.I Chief Executive, Helen McLeod, "During the 10,000 earthquakes and aftershocks in 2010-11 in Christchurch CSI equipment has captured one of the most dense datasets recorded over and around a fault rupture zone."

This expertise is now being used to provide instant reports on multiple parameters for a broad range of public and private sector prime assets such as seaports, airports, bridges, dams, public buildings and commercial property throughout New Zealand and in places such as Singapore, Italy, U.K, Romania, South America, Iceland and The Philippines.

"During the Christchurch 2011 February earthquake we saw key facilities able to reopen instrumented areas to the public within 20 minutes using measurements from our equipment to show that the motion on site was within the tolerance of the structure." McLeod added, "We are now also seeing engineers testing buildings to check that day to day movement is in line with the design expectations."

In New Zealand the CSI system is monitoring seismic risks on several major public buildings including the Civic Office of the Christchurch City Council, terminals at Christchurch International Airport, and buildings at Wellington Hospital and at the University of Canterbury and Victoria University. It is also deployed at Majestic Centre, a significant high-rise office tower in Wellington and at one of New Zealand's major seaports, Lyttelton Port of Christchurch. CSI is working closely with the Crown owned Institute of Geological and Nuclear Sciences to monitor fault-line activity in Canterbury, Wellington and Nelson regions. 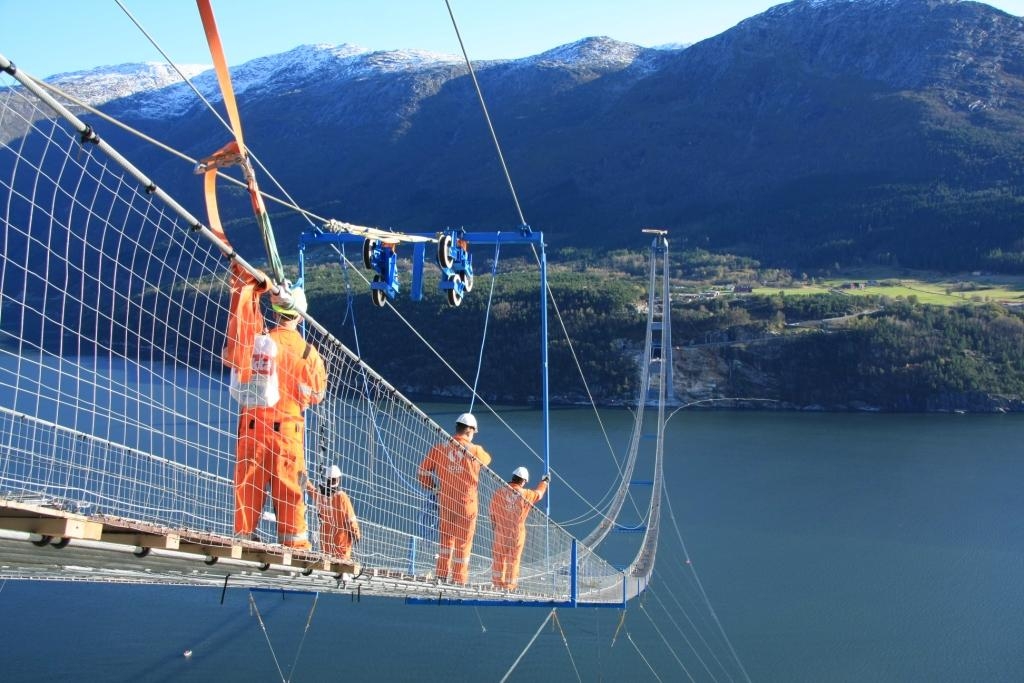 Construction in Norway of the Hardanger suspension bridge which will be monitored by an array of strong motion measurement instruments made and installed by the New Zealand company Canterbury Seismic Instruments.

CSI's sale of movement recording equipment to the Hardanger bridge project was featured on TV3 in New Zealand. Click here to view.