John’s role at Canterbury Seismic Instruments began over a decade before our incorporation with a spark of an idea to predict the levels of damage that Christchurch could expect from a rupture on the alpine fault. Lacking the funds to build the network of seismographs this project needed, John collaborated with the electrical engineering school to develop his own instruments. 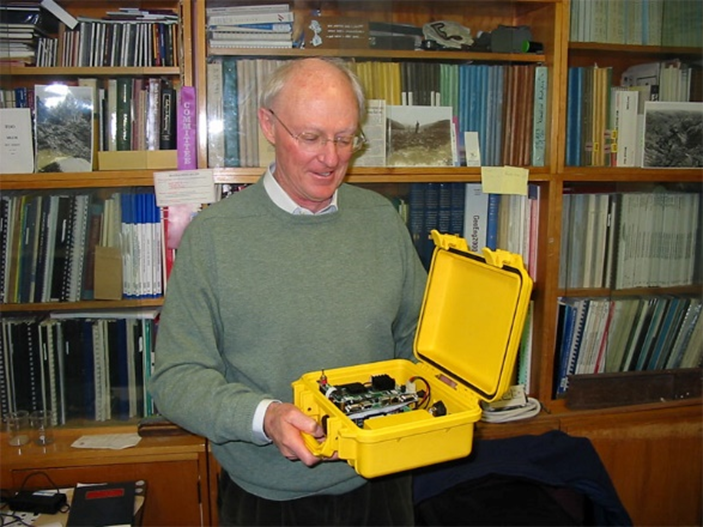 John drew up his vision for a new type of instrument, and with then-student Hamish Avery, developed the world’s first new-generation internet-native seismograph. With people keen to buy them, and a vision to transfer the network into the fledgling GeoNet network, CSI was formed along with long standing board members, David Stock and Bruce Rickard. On the back of this, John’s vision was realised as CanNet, New Zealand’s first dense seismic network that later became part of GeoNet.

It was John’s determination to put dense instrumentation across Canterbury and within Christchurch that delivered the invaluable dataset from the tragic earthquake sequence in Canterbury from 2010-2011. Data captured by the original CanNet network has been widely used and cited and has directly improved our understanding of earthquake risk and best-practice engineering. John’s vision has led to better outcomes for the future, not just for Christchurch or New Zealand, but internationally.

John was an active member of our team, from governance through to technical advice and guidance, right until the end. John continued to keep us at the forefront of technical developments and in recent years has been a vital player in the development of yet another international milestone for CSI: the Sentinel Earthquake Response and Resilience Service takes the hard-earned lessons of the Canterbury quakes and delivers a globally unique step forward in improving urban earthquake effects management and resilience.

It is hard to quantify the impact an individual has, but for some, we know their impact reaches far beyond their immediate circles. John’s legacy lives on in the engineers he has taught over his long career as an academic, the datasets he was vital in creating, and the ongoing resilience and safety improvements his vision will deliver over the coming times.

Above all this, John was a dear friend to us, and we miss him very deeply.